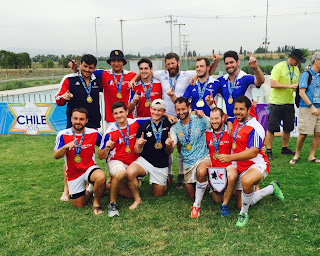 The Maccabi USA Rugby squad has just returned to the United States following the 2015 Pan American Maccabi Games, which was held in Santiago, Chile. Before this year’s edition, Rugby was last played at the 1995 Pan American Maccabi Games, with the USA winning Gold in the 7s competition. This time Rugby XVs was added with Argentina, Chile and the USA taking part – alongside the Prince of Wales – winners of the National Chilean Club championships in 2015 (added as a warm-up fixture).

Take the jump to read more.

This tour was vital for the development of existing and new Jewish Rugby players, giving the program more structure as it competes at the World Maccabiah Games every four years. At the 2013 Games, the USA squad won Gold in 7s at the and Bronze in XVs. Preparation will begin soon ahead of the 2017 World Maccabiah Games – with application details to be released in March 2016.

Could not authenticate you.